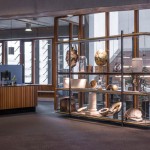 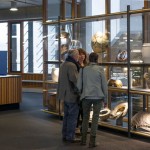 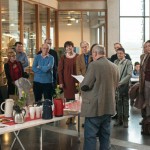 I stand before you as a palaeontologist.You may wonder what that has to do with Elsbeth’s work.A great deal, I can assure you.Elsbeth is fascinated by geology, palaeontology and archaeology.And I want to prove that by reviewing some of her works.If you have looked at the book, these works will be familiar to you.

If I hold up my finger, it is one of Elsbeth’s works.

One of Elsbeth’s works in called “WING“.You could view it as part of the Phoenix.There are a number of works that can be seen in this way here.The Greeks thought that the phoenix was capable of being reborn again and again by arising from its own ashes.It would then make a nest of herbs and spices at the top of a tree and burn within it. The scent of the spices would cause it to be reborn.That would happen once every 500 years.In Chinese culture, the bird represents the female sex in the world:Elsbeth herself of course.

Sometimes it isseen as the bird Roc.The Roc is a mythical bird of enormous dimensions.It appears in the adventures of Sinbad the Sailor, a series of stories from 9th century Persia and Arabia, and is also mentioned by Marco Polo.The stories about the Roc are probablybased on a species of bird that did once exist.Enormous ostrich-type birds, now extinct, known as Aepyornis maximus were found on Madagascar.The Persians and Arabs who traded along the entire coastline of Africa as far as South Africa may have seen thisbird, which probably died out around 1650-1700.The flying Roc was so big that its wings obscured the sun.It even fed its young with elephants.The Roc brings us to the artificial island of Malta.Here on the island you find giant swans and dwarf elephants, possibly a tasty snack for the Roc.

Another strange bird is the griffin. It is a hybrid, legendary creature that symbolises dominion over two kingdoms:the earth (by having the body of a lion) and the air (by having the head and body of an eagle).As such, it is a hybrid creature comparable with the centaur, the dragon and the hippogriff.Apart from the features already mentioned, it also has the ears of a horse and a cockscomb that appears to be made from fish scales. The assumption first put forward by the palaeontologist Jack Horner is that the myth of the griffin, which devoured fortune hunters in the deserts of Asia, originated with people who had come across fossils of protoceratops there: a dinosaur that also had a bird-like head and a beak.Theyguarded the Gold in Platinum or “From gold to Platinum“. These dinosaur fossils lay along the Silk Road in Mongolia. Marco Polo had walked on the Silk Road.

We could also add Icarus to this list.If his wings had been shone upon by Elsbeth’s Sunflowers, they would have melted and he would have plummeted to the ground.

Maybe all these bird-like creatures have something in common; it is all Mythos Berlin since: if you trace things back to their origins, everything turns out to be connected.

The work Evolution refers of course to evolution.And then via the Monkey House, we come to Lucy, the most complete skeleton of one of our ancestors.We can consider this fossil to be a Guide fossil.Even the leaf fossil looks a little like Lucy’s skeleton.

The scallop, the spirals that resemble ammonites: it is all palaeontology.Everything is crystal clear.

But there is also geology too of course, such as Ore in wave stone, erosion.Let’s end with the wishing well, and express the wish that Elsbeth will arise from her ashes and that the exhibition will be a success.Having said that, I would now like to open the exhibition.